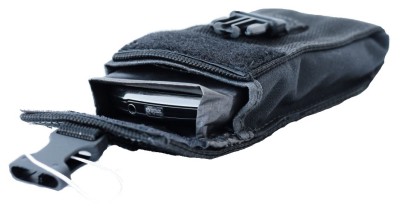 How does it work?
Chuck’s Stealth Case uses the principle of a Faraday cage to block all radio signals from entering and exiting the case. Your phone contains an antenna that communicates with cell towers and WIFI routers. Both of these signals, radio waves in the range of 0.5 to 6 Ghz, are blocked by the metallized fabric in the case.

Can’t I just turn my phone off and protect my privacy?
No, technology developed in 2004 (codenamed “The Find”) will allow the government and law enforcement to track the location of a cell phone, even when it is turned off, as reported in the Washington Post. Check out this article and this article for more information.

Can I be listened to even if my phone is off?
Yes, even if your cell phone is turned off, you can still be listened to. A method called “roving bug” has been used by the FBI to track down drug dealers. Check out this ABC news article, which describes how the FBI used this technology and how the courts allowed this evidence to be used at trial.

OK, so the technology exists, but is the government actually spying on American citizens?
Yes!, The head of the National Security Administration (NSA), Keith Alexander, has already admitted before congress that the NSA has used this technology on American citizens. Check out this articlefor more information.

Doesn’t my fouth amendment right to privacy protect me?
Supposedly, the Fourth Amendment to the U.S. Constitution guarantees personal privacy, and every citizen’s right to be free of unreasonable government intrusion into their persons, homes, businesses, and property. However, a 2012 federal appeals court case (U.S. vs Skinner) said that you have no expectation of privacy when the police or government want to track your location using your cell phone. That’s right, they can use your cell phone, without a warrant, to see which political rally you attend, which church you go to, and where you are at any given moment. Check out thisarticle for more information.

Is the government the only ones that can be spying on me?
No. Your boss, wife or neighbor can use commercially available software, like Mobistealth, Spybubble and Mobile Spy to track your location. These programs can be loaded onto your cell phone without your knowledge and used to track your evert move. Check out this article for more information.

Will it damage my phone or affect my service?
No. Chuck’s Stealth case does no damage to a phone. Service is resumed when the phone is taken out of the case, just as it does when entering or exiting areas where there is no reception.

What about removing the battery?
Removing the battery from many phone types is difficult or impossible. Removing a battery only removes the main power source. Some phones have internal backup batteries. Often these are used to remember logic states and improve startup times. It’s possible that these could also be used for roving bug software.

This version of Chuck’s Original Cell Case has a nylon webbing strap that allows you to attach the holster to your belt vertically, making the buckle opening open at the top of the case. Some of the phones which fit within this case include: 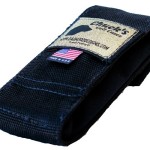 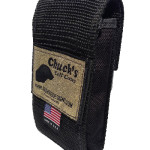